FIND A PRODUCT BY

Home › Blog › What Is The Purpose Of The Thermostat Housing? 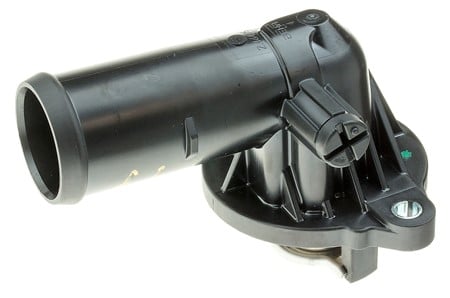 What Is The Purpose Of The Thermostat Housing?

All thermostats do the same job; they delay the circulation of engine coolant until such time as the engine warms up. On the engine side of the thermostate housing there is a little wax filled cylinder that doesn’t begin melting until the engine reaches the thermostat design temperature which is about 180 degrees F. There is a small rod connected to a valve that is closed when the engine is cold, when the wax melts it expands and in doing so it pushes the rod which in turn opens the valve allowing coolant to flow. Regardless of whether the thermostat is a standalone device or one which is integrated into the thermostat housing, the operation is the same.

In the event there is need to replace the thermostat, integrated designs make the replacement job much simpler. Twenty-five years ago vehicle manufacturers began to understand this and started fitting them at the factory; today they are almost in universal use. The primary beneficiary is the mechanic; he can now replace the thermostat quickly with no fear that in the process the housing may be broken or damaged.

STAY UP TO DATE WITH ALL THINGS MOTORAD

Leave your details and be the first to receive our latest news and updates.

More From Our Blog

What it takes to do the job right!

Any cookies that may not be particularly necessary for the website to function and is used specifically to collect user personal data via analytics, ads, other embedded contents are termed as non-necessary cookies. It is mandatory to procure user consent prior to running these cookies on your website.